A Key to the City – Lemberg (Reclaiming the Past) 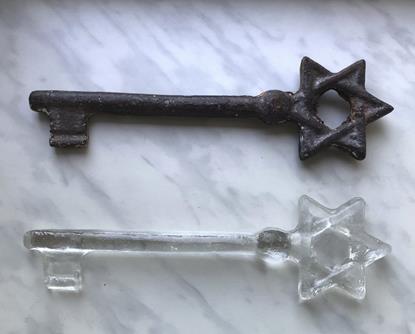 The city of Lviv held a ceremony, called A Key to the City Reclaiming the Memory of the Past, on September 2, honoring dozens of Jewish heritage activists for their work in “preserving, promoting and carrying out research and educational work on Jewish heritage in Western Ukraine.  One of the recipients was Marla Raucher Osborn, from Rohatyn Jewish Heritage and member Gesher Galicia Advisory Board. Rohatyn Jewish Heritage focuses on recovering gravestones and restoring Jewish  cemeteries. The ceremony coincided with European Day of Jewish Culture and commemorating the 75th anniversary of the liquidation of the Nazi ghetto and Janowska Labor/concentration camp and the destruction of the Jewish community.

The recipients received  a glass replica of an ancient synagogue key found with a Star of David purchased by Rachel Stevens, American sculptor and researcher,  early in the year at L’viv’s Vernissage folk market The keys represent a “symbol of gratitude for preserving Jewish heritage.” Stevens used glass for the replicas because in Jewish tradition the material “represents the fragility of life.”

Before World War I, Lviv and the surrounding area were part of the eastern Galicia region of the Austro-Hungarian empire and the city was called by its German name, Lemberg.

To read more about the history about the commemoration  see the AP story at: https://www.apnews.com/f6dfbcbea00c44d9b1d3f9df895c13d4/Ukrainian-city-remembers-Jews-on-Holocaust-anniversary

AP also has  number of photographs attached to their story. JewishGenner Randy Herschaft contributed to the AP story.